Saint-Marc is a commune in western Haiti in Artibonite. 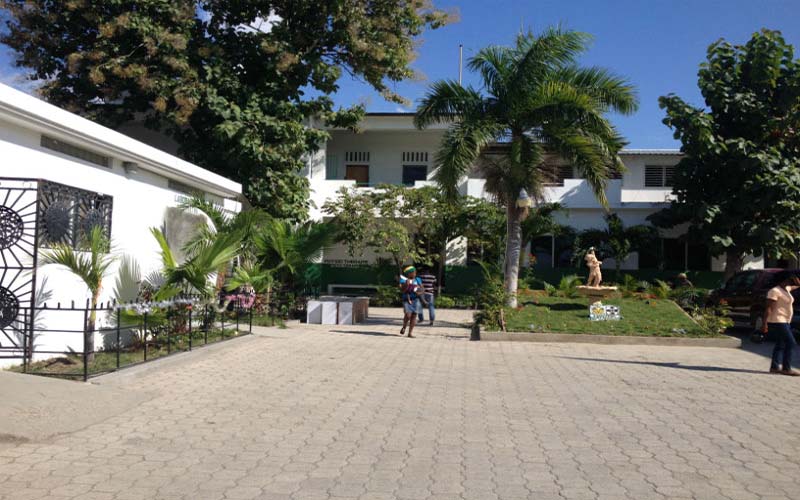 Saint-Marc (Haitian Creole: Sen Mak) is a commune in western Haiti in Artibonite. Its geographic coordinates are 19°7′N 72°42′W. At the 2003 Census, the commune had 160,181 inhabitants. It is one of the biggest cities, second to Gonaïve, between Port-au-Prince and Cap-Haïtien.

The port of Saint-Marc is currently the preferred port of entry for consumer goods coming into Haiti. Reasons for this may include its location away from volatile and congested Port-au-Prince as well as its central location relative to a large group of Haitian cities including Cap-Haïtien, Carrefour, Delmas, Fort-Liberté, Gonaïves, Hinche, Limbe, Pétion-Ville, Port-de-Paix, and Verrettes. These cities, together with their surrounding areas, contain nearly eight million of Haiti's ten million people (2009).

In 1905 the Compagnie Nationale or National Railroad built a 100 km railroad north to Saint-Marc from the national capital of Port-au-Prince. The track was later extended another 30 km east to Verrettes.

St. Marc is a large port town surrounded by mountains. At all times, there are many boats in the port, typically sailboats. The town was first settled in 1716, then located in the French colony of Saint-Domingue.[1]

The town is located on flat land close to the sea but its edges extend into the foothills. From these vantage points, the ocean is sometimes viewable. The city has a few park spaces, including Place Cite Nissage Saget. These parks are often surrounded by vendors with carts full of goods.

Local residents enjoy the rich culture of St. Marc and it is considered a safe place to live. About 60% of the population lives in the communal section, meaning outside of town. As a result, they are beyond its infrastructure and lack drainage systems, electricity, and potable water.

Recent development projects have been underway in St. Marc, with assistance and funding from USAID and IOM. They include: grading and paving roads, implementing a sewage/drainage system and providing access to potable water at various points throughout the larger town. In addition, a USAID project trained youth to map the town on OpenStreetMap, a free, editable online map.

The way to get from the capital of Port-au-Prince through St. Marc is by means of Route Nationale # 1 (Haiti Highway 1), which extends all the way up to the coastal towns of Montrouis and Gonaïves, before reaching its terminus at the northern port of Cap-Haïtien.

The most prevalent mode of transportation is the motorcycle (mobylette), due to the inexpensive maintenance and low gas consumption. Generally, people fit as many as four on a bike even though the mobylettes are designed for a maximum of two people. Bikes are another common source of transport. Cars are considered a luxury mode of transportation.

St. Marc is known for being a blend of city and rural lifestyles. For many living in Port-au-Prince, it is considered the start of the “country”. Goats are rampant and can be seen roaming about the city streets. Many people in St. Marc also own cows or chickens.

Haitians are a very hospitable and welcoming population, including those in St. Marc. It is said here that “Bonjou is the passport”, meaning that saying hello opens doors. Every time you see someone you know or have just met, you must say either “bonjou or bonswa”, literally meaning ‘good morning’ or ‘good evening’. Typically the person who enters a room makes the greeting.

Although St. Marc is known as the “pleasure city” as many young people reside here; the majority of people live in abject poverty and work extremely hard to make ends meet.

Haitians tend to have a style of talking with powerful projection. Visitors sometimes perceive them to be angry when they are having ordinary exchanges. People in St. Marc enjoy exchanging jokes with each other. Comedy is a favorite pastime.

There are three main types of music listened to in St. Marc:

In St. Marc, many people also listen to popular American music. Popular Haitian groups have developed over the years, such as Les Formidables. This group is no longer together as most members live overseas, but the group’s music lingers in the culture. Virtuose is a very popular group in St. Marc. BC and Group 703 are other popular Haitian groups.

RapCreole is an emerging popular style among the youth. Typically this kind of rap uses rhythms typical of Haitian folk or popular music. Popular ‘RapKreyol’ artists include BC (Barikad Crew), Skwardy, Izolan, Fantom. Sebastien Pierre is a popular R&B artist.

Zomò is one of the most popular singers at Saint-Marc. In 2014, he featured in music called Lifes goes on which was one of the best in Haiti.[

Food plays a large role in the life of people in St. Marc. Meals are an important part of normal daily social interaction. For the most part, cooking is done outside to avoid overheating and moisture collection inside.

Plantains, rice or pasta are staples of almost every meal. Seafood is also consumed regularly. For instance, crab, dried cod and fresh fish are available.

Goat is perhaps the most common meat, but chicken and beef are also consumed regularly. Haitians have an affinity for either very spicy food (even peanut butter is spicy) or very sweet food (sugar is added to sugary cereals). Spices and spicy peppers are used abundantly in Haitian cuisine.

A significant amount of produce is grown locally, specifically bananas, plantains, mangoes, cherries, corn, manioc, rice, and tomatoes. The typical St. Marc resident consumes a lot of fruit. A dish very specific to St. Marc consists of rice with sauce “pois” (beans), crab/goat meat mixed in, or both. Other dishes include bananne pesse (fried plaintains) which are accompanied with piklese, a spicy “gardiniera” mixture that consists of carrots, cabbage, and peppers.

Soup is typically prepared on Sunday to make use of all the week's leftovers. It usually consists of several types of meat, potatoes, and carrots. Fresh fish, typically sole, is also consumed regularly. This fish is cooked over an open fire with a mayonnaise-based marinade mixed with various spices.